Rachel Smith walks out of court after being acquitted of child abuse resulting in death in District Court on Wednesday, July 3, 2019. Luis Sánchez Saturno/The New Mexican 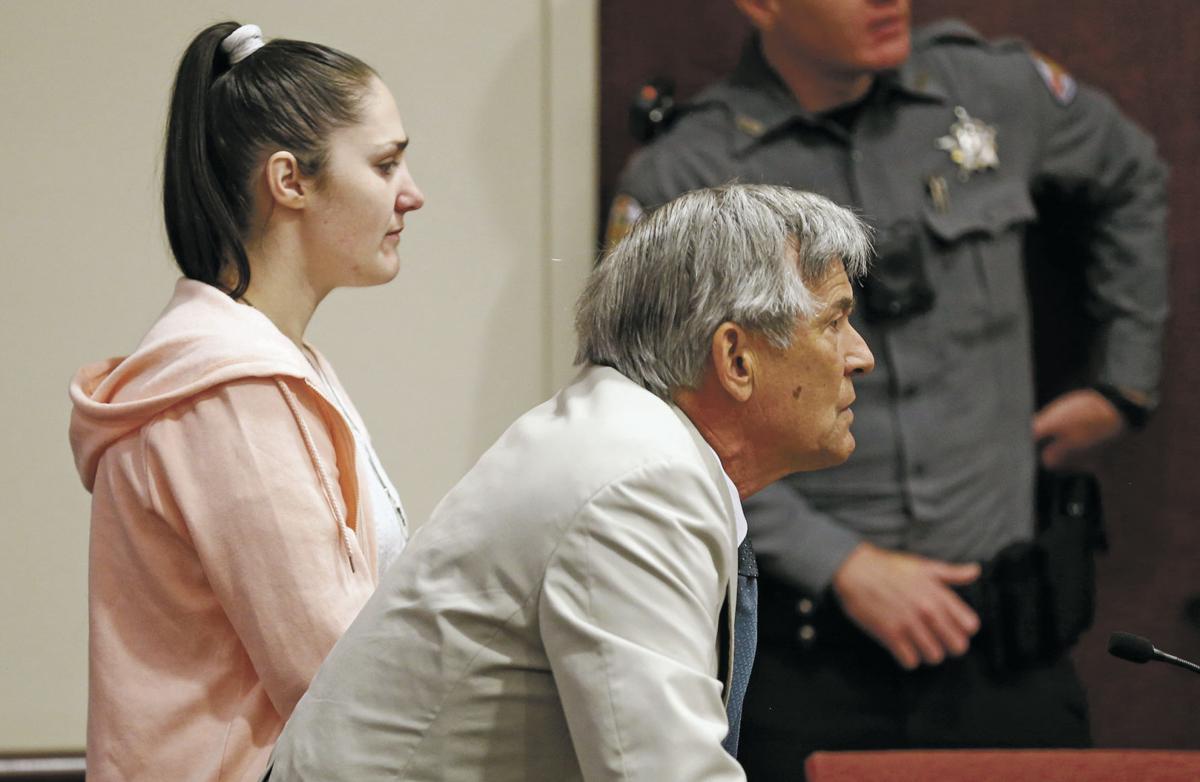 Hugh Dangler stands next to her client, Rachel Smith, as she hears a not guilty verdict in her child abuse resulting in death trial in district court on Wednesday, July 3, 2019. Luis Sánchez Saturno/The New Mexican

A jury Wednesday morning found Rachel Smith not guilty of child abuse resulting in the death of a 3-month-old baby in 2017.

Smith, 28, was found guilty on two counts of obstructing the investigation into the child’s death and drug possession. Because she has already served more than two years in custody on electronic monitoring, her lawyer asked she be released for time served.

Trembling slightly, both Smith and a defense attorney, Hugh Dangler, appeared to cry after the verdict was read. Several members of Smith’s family brought their hands together in prayer to thank Dangler as the courtroom emptied.

The baby’s mother, Angel Arellano, 20, exited the courtroom, sobbing in a summer dress.

On March 11, 2017, Smith had been babysitting the infant, Jonathan Valenzuela, and his 2-year-old sister at her room at the Thunderbird Inn, when she awoke to find the baby had stopped breathing.

Smith, from Glorieta, admitted to police she had injected heroin the night before the baby’s death, and was indicted on charges of reckless disregard, which could incur an 18-year prison sentence. Police initially believed Smith, who had been watching the children for 33 or 34 hours, may have rolled over the baby in her sleep.

An autopsy report later showed there had been bleeding in Valenzuela’s brain, likely caused by blunt force trauma, and broken bones in the infant’s neck, consistent with strangulation.

Prosecutors for the state asked during the trial if she had harmed the baby in a stage of drug withdrawal, as the heroin left her system.

The trial was postponed in March when new evidence raised questions over whether the baby’s mother, Arellano, might have shaken or injured the baby before leaving him in Smith’s care. Arellano has said she did not harm her son.

Dr. Heather Jarrell, a neuropathologist with the New Mexico Office of the Medical Investigator, and a witness for state prosecutors, said earlier this week the injuries could have been caused within 24 or 48 hours of the baby’s death.

“This is a mysterious death,” Dangler said. “And will probably remain so.”

Rachel Smith has spent the better part of the past two years in the county jail awaiting trial on a charge that she caused the death of a 3-month-old infant left in her care in a Cerrillos Road motel room in 2017.

But Smith’s defense attorney and prosecutors recently told a state district judge that new evidence raises the possibility that the child’s mother, Angel Arellano, might have inflicted the injuries that led to the death of Jonathan Valenzuela.

Arellano had dropped off the boy and his 2-year-old sister at the motel to be cared for by Smith.

State District Judge Mary Marlowe Sommer postponed Smith’s trial this month — just three days before it was set to begin — to give investigators time to pursue new leads in the case, including allegations that Arellano confessed to an acquaintance she had hurt her son.

“It would be extremely difficult, if not unethical, for the state to go forward with the trial at this point without setting our minds at ease that we do indeed have the right person in the courtroom,” Assistant District Attorney Larissa Breen said during a court hearing.

Smith is now out on bail with electric monitoring. She still faces a first-degree felony charge that could send her to prison for up to 18 years.

Arellano’s attorney, Marc Edwards, said Friday that he had just taken her on as a client and could not comment for this story. Arellano hasn’t been charged.

Smith’s defense lawyer, Stephen Aarons, recently filed a motion asking the court to approve an arrangement that he hopes will encourage the child’s mother to testify on Smith’s behalf at trial, even if it means implicating herself.

Aarons is asking the court to grant “use immunity” to Arellano, who is listed as a witness for the state. Such immunity would prevent prosecutors from using anything she said on the stand during Smith’s trial to prosecute her for her son’s death.

The immunity would not prevent the state from prosecuting her based on other evidence.

Without the immunity, Aarons says in his motion, Arellano will invoke her Fifth Amendment right against self-incrimination by remaining silent during Smith’s trial.

Arellano attempted to abort her son by self-harm while pregnant, screamed that she did not want the baby and threatened suicide before he was born, the lawyer says in his motion. He also wrote that Arellano gave the baby to Smith about 33 hours before his death. “The baby could have been grabbed by the throat and violently shaken before this final exchange,” Aarons wrote.

Smith assumed care of Jonathan and his sister on March 10, 2017, according to police reports. She told police she fed him and put him to bed but awoke the next morning to find he was not breathing. She then called 911.

The child had no visible injuries. Smith told investigators she had used heroin the night before, and police originally speculated she may have rolled over on the child in the night.

An autopsy revealed the boy died from bleeding in the brain caused by blunt force trauma.

The father of a man with whom Arellano — then 17 — was involved at the time has since told police that Arellano told his son that she had harmed the boy before delivering him to Smith, according to court filings.

“The state has no doubt Defendant would like to have Ms. Arellano have leave to testify she may have actually killed [Jonathan], if that is indeed what she will say,” Breen wrote in a motion filed Friday in state District Court, “but the court has to look at the potential detriment to the public interest in getting justice for [the baby’s] death.”

Rachel Smith, 27, had been in jail since her March 2017 arrest in connection with the death of the baby boy at a Cerrillos Road motel.

The infant’s mother — then 17 years-old — had left two children with Smith for five days preceding the death, according to court records, and Smith was living with the children in the Thunderbird Motel when she woke up one morning to find the baby was not breathing.

Investigators originally speculated that Smith — a heroin addict who admitted shooting up in the bathroom while she was watching the boy and his 2 year-old sister — might have rolled over on the boy. However, an autopsy later revealed the infant had bleeding in his brain consistent with “blunt force trauma.”

Smith’s defense attorney, Stephen Aarons, filed a motion in November seeking to have the charges dismissed on grounds that her rights to a speedy trial and discovery of evidence had been violated. Among other things, he argued that it took prosecutors about a year to produce Children Youth and Family Department records that could include evidence that the infant’s mother had abused him.

State District Judge Mary Marlowe Sommer postponed her decision on that motion during a hearing Tuesday, saying she needed to review the Children Youth and Family Department records before ruling.

Aarons also filed a motion challenging one of the state’s expert witnesses, saying the proposed witness’s opinions on “shaken baby syndrome” as it relates to pinpointing when the child received the fatal injury are not typical and have been contradicted in literature that says determining time of injury is the unreliable “Achilles heel” of forensic pathology.

Sommer also postponed ruling on that motion Tuesday, directing Aarons and Assistant District Attorney Larissa Breen to expand written briefs on the issue before the judge considers the matter again next month.

The jury acquitted Rachel Smith in the death of an infant she was babysitting.